Researchers believe bittermelon may lower blood sugar by increasing the activity of hexokinase and glucokinase, enzymes in your body that convert sugar into glycogen, which can be stored in your liver and used later for energy.

The plant's phytochemical composition is a combination of steroidal saponins, charantin, peptides, and alkaloids that contribute to bittermelon's hypoglycemic

Practitioners of Ayurvedic medicine have used bittermelon as a treatment for skin diseases, especially scabies.

The juice is extracted from the leaf and applied externally to the affected area.

The seeds are used topically for skin swellings caused by sprains and fractures, and for sores that are slow to heal. 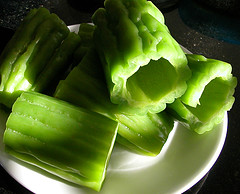 "Bittermelon was described as 'bitter in taste, non-toxic, expelling evil heat, relieving fatigue and illuminating in the famous Compendium of Materia Medica by Li

In addition to relieving the symptoms of diabetes, bittermelon is used in traditional Chinese medicine

For the Melon to be effective it needs to be consumed in its raw form.

Recommendation here is juicing it.

A juicer, or a blender with some water and then strain the pulp

Sufferer from diabetes are recommended to drink 30-60ml of bitter melon juice before each meal.

Rich in iron, bittermelon has twice the beta carotene of broccoli, twice the calcium of spinach, twice the potassium of bananas, and contains vitamins C and B 1 to 3, phosphorus and good dietary fiber.

It is believed to be good for the liver and has been proven by western scientists to contain insulin, act as an anti-tumor agent, and inhibit HIV-1 infection. 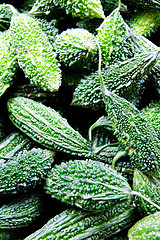 Scientists have uncovered the therapeutic properties of bittermelon, a vegetable and traditional Chinese medicine, that make it a powerful treatment for Type 2 diabetes.

Teams from the Garvan Institute of Medical Research and the Shanghai Institute of Materia Medica pulped roughly a tonne of fresh bitter melon and extracted four very promising bioactive components.

These four compounds all appear to activate the enzyme AMPK, a protein well known for regulating fuel metabolism and enabling glucose uptake.

People with Type 2 diabetes cannot convert the sugar in their blood into energy in their muscles.

Exercise activates AMPK in muscle, which in turn mediates the movement of glucose transporters to the cell surface, a very important step in the uptake of glucose from the circulation into tissues in the body.

This is a major reason that exercise is recommended as part of the normal treatment program for someone with Type 2 diabetes.

The four compounds isolated in bitter melon perform a very similar action to that of exercise, in that they activate AMPK.

"The advantage of bittermelon is that there are no known side effects," said Dr Ye. "Practitioners of Chinese medicine have used it for hundreds of years to good effect."

As revealed in the study, there may be as many as 70 active compounds in bitter melon.

Have A Great Story About This Topic?

Do you have a great story about this? Share it!