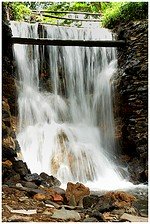 Magnetic Water for your body cells

Water, which makes up over 70% of the body's structure, is the most influential and vital component which provides the body with a mechanism to maintain and restore homeostasis.

(1) However, environmental changes have imposed many new pathologic influences, which have overtaxed the body's ability to remain in a state of balance.

(2) Among these are toxic drinking water, and soil toxicity and mineral depletion which affect nutritional components in food.

(3) The results can be seen in the rise in incidence of chronic, degenerative diseases, which are not successfully treated by conventional medicine.

(4) In fact, this dilemma has been further compounded by the standard procedure of over-administering medications which present long-term difficulties in the body's ability to maintain its state of balance, or homeostasis.

(5) In order for water to be the medium for the body's ability to maintain its health and vitality, it must enhance, not deter bodily functions

Using the premise that if the body is 70% water, a cell 70% water and DNA 70% water, then the quality, content, structure and frequency of the water in the body must be optimal.

Among the many functions demanded of water in sustaining the health and stability of any living organism is its role as a solvent, catalyst and transporter

Water dissolves 80 different proteins, as well as glucose and electrolytes, and transports them to every cell

(6) Water, which composes most of the blood and bodily fluids, is responsible for activating the process in the body which allows bacteria to remain stable.

(7) Another important fact of physiologic function is the role of magnetism in the body in creating and maintaining an energy field.

The body flourishes in an electro-chemical environment, which is activated by its response to magnetism

Electro-magnetic energy and the human body have a valid and important relationship.

(8) Water, which is naturally formed with magnetic properties and reacts with the body's magnetic influence will enhance the way the body maintains a state of balance along with its efficient use of energy.

There are also several reports on medical uses of magnetic water in treating chronic, intractable disorders in Russia, China and Europe

With the rise in acceptance of alternative and complementary approaches to medicine, the theory post-ulated by this study has been found to follow principles being formulated by theories in new medical philosophy, such as those presented by Vibrational Medicine, Bio-Energetics and Energy Medicine

The common message among these quantum scientists is that magnetic energy is instrumental in establishing the body's ability to maximize its vital potential, and water is the key medium in the body for this to take place

Living cells are tied together by a matrix of water molecules

Like the atoms that compose them, they are tied together by ionic bonds consisting of positive and negative charges on their outer surfaces.

In order for water to form ordered, structural energy bonds around cells, there must be active magnetic influence present

Water molecules lose order when they are not adequately magnetized

Inadequate magnetized molecules will disrupt hydration around them, creating disorganized movement for both the cell and the surrounding water

Magnetism takes place when electrons orbit around their atoms

If neighboring electrons are made to spin so their poles are aligned in the same direction, the cell becomes magnetically-activated